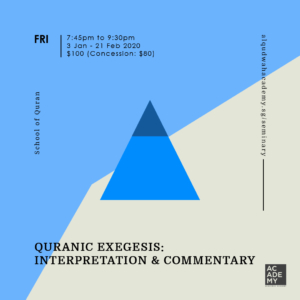 “Oh believers! Obey Allah and obey the Messenger and those in authority amongst you. Should you disagree on anything, then refer it to Allah and His Messenger, if you truly believe in Allah and The Last Day. This is the best and fairest resolution. ” (Surah An-Nisa-, Ayat 59)

The Quran is The Speech of God, an intrinsic miracle and a linguistic masterpiece, all at once. The earliest scholars of The Quran sought to understand The Word of God, primarily through the teachings of The Prophet Muhammad ﷺ. The concurrent development and documentation of the Hadith sciences assisted the study of The Quran, enabling it to flourish organically, while being rooted to, and within, the tradition.

Advancements in various scopes of knowledge brought new perspectives and facets of thought within the realm of academia, sparking a fresh approach to deriving meanings from The Quran. While some of these approaches have been validated by the Islamic scholarship, there are some methods which have been contested and rebuked due to their lack of adherence to the foundational principles that are rooted within the study of the religion. As new thinkers began to formulate methodologies that would assist in the interpretation of The Quran, the sciences of Tafsir witnessed its growth, through the codification of its studies, materialized today in the form of scholarly works and research.

The Quran presents to you an ocean of knowledge that never ceases to amaze the human mind. Let’s learn the methodologies of interpreting divine revelation with faithful conviction.

There are no prior qualifications required to attend this course. Students need not attend the previous modules to attend any Seminary modules.

Please note that instructor may wish to do a make-up tutorial should there be any cancellations.

Concessions are available for full-time students, NSFs, senior citizens aged above 65, the unwaged, people of disabilities and those require financial aid.

Instalment plan available.  You may drop us an e-mail (info@alqudwahacademy.sg) to request for an instalment payment plan after registering.

Admin and material fees are included.

Students are required to complete payment of fees within 48 hours after online registration. Registration will only be confirmed upon completion of payment. Please email us for payment extension.

Payment Modes: Interbank Transfer/PayNow. Interbank transfer and PayNow details can be found in the automated e-mail that will be sent upon online registration.

We're sorry, but all tickets sales have ended because the event is expired.